This is a departure from Morgan Mandel’s previous books because the stars of this one happen to be Seniors! One’s a widower, the other’s a bestselling author who’s never found a man to live up to the heroes in her books. The two happen to meet at of all places, a Dog Pound.

Kindle Unlimited and Prime Members can read this book free)

Rina wants to get even with Grant for not keeping his promises when she needed him most.

Garrett craves his brother’s woman and billion dollar company. He’ll do anything to get them, even kill.

Grant awakens from a coma and discovers his woman and company have been stolen. Can he get them back?

Find all of Morgan’s books at: http://www.amazon.com/author/morganmandel

$2.99 on Kindle will get you your copy of Morgan Mandel’s romantic comedy chick lit at its best, called Her Handyman.

Jake the Handyman gets a late night distress call from rich artist, Zoe. Her toilet is overflowing, and the bathroom is flooding! Little does Jake know that when he gets there, he’ll be the one who needs rescuing! Blame it all on her dog, FuFu!

Find Her Handyman at http://amzn.com/B0097EVXBK 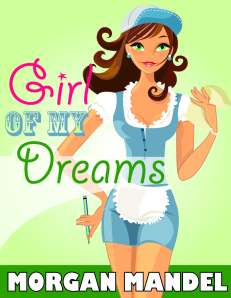 Girl of My Dreams by Morgan Mandel

Morgan Mandel’s romantic comedy, Girl of My Dreams, has now been re-released as part of KDP Select, available only at Amazon, FREE TO PRIME members, all others pay the low 99 cents price!

A temp’s good deed goes horribly awry when she subs for a cast member in a reality show to win the prize of a billionaire. All Jillian wants is to save the producer from an embarrassing situation. All he wants is to strangle her for her deceit. The show must go on, despite the tension between the two. Will Jillian win the billionaire? Does she want him, or is it the producer she’s after?

I thought I’d share with you all the latest Killer Career Reviews. First, what it’s about:

A lawyer’s career change could be a killer when her mentor, A New York Times bestselling author, does more than write about murders.
Meet Tyler Jensen – a sexy bestselling author, with serious hangups.
Meet Dade Donovan, a just as sexy attorney, who wakes up to his true feelings when it could be too late.
Meet Julie McGuire, a lawyer, whose passion for writing leads to the death of more than one person.

Robert Walker, author of Dead On, says, “Killer Career hits all the right keys and notes! Author Mandel has hit her stride! A great read!” – For more, see Rob Walker’s review at Amazon’s print version of Killer Career, along with other reviews.

Austin S. Camacho, author of Russian Roulette, says, “The roller coaster of joy and horror, love and terror made me dizzy until the final surprise.”

Cheryl C. Malandrinos of http://thebookconnectionccm.blogspot.com, says, “Once in a while you find a book that forces you to steal moments away from work, the kids and all your other responsibilities just so you can sit down and read it. Killer Career is that book.”

Unwriter Ron Berry at http://unwriter1.wordpress.com, says, “Morgan Mandel writes an intriguing tale that will keep you turning pages until the last shoe drops.”

Hagelrat at Un:Bound, http://hagelrat.blogspot.com, says, “I have been working long hours this week with special olympics and was failing at reading everything I picked up, putting it back on the shelf a few pages in, but this hit exactly right spot. It’s a cute cover…”

Carl Brookins of  www.carlbrookins.com, says, “This is a well-put-together novel that carries the reader briskly to a smashing conclusion.”

Killer Career, Morgan Mandel’s romantic suspense about a lawyer who gives up her practice to be a writer, which turns out to be very dangerous, is available for $2.99 at

THIS PRINT EDITION IS NO LONGER AVAILABLE AT THE LOCATIONS LISTED.

Sightings of Killer Career are reported in many online locations.  The first ebook edition to hit the market, and now available, is at www.Mobipocket.com – Head on over there to purchase your copy at the lucky seven price – $7.77.

Here’s the buy link to own your copy right now:

Preordering of the paperback edition set for release August 15 can be found at these locations:

Amazon.com, bn.com and target.com, with more locations to follow.

Just spotted the first buy link for KILLER CAREER by MORGAN MANDEL tonight. The official publication date is August 15, but Killer is moving ahead of schedule. Here’s the link in case you want to rush over and get your copy before everyone else hears about it.

What Killer Career is About:

When Attorney Julie McGuire decides to quit her day job to follow her dream to be a writer, she has no inkling of the danger posed by her mentor, Tyler Jensen, a NY Times bestselling author who is also a psychotic killer with serious hangups brought about by childhood abuse. Her decision not only puts herself at risk, but also Dade Donovan, her bestfriend and partner, who means more to her than she first realizes. To save herself and Dade she must conquer her greatest fear:claustrophobia.

Light Refreshments, Raffle, Autographed Copies of KILLER CAREER
MORE ABOUT KILLER CAREER:
If you’ve ever had a job you wished you could leave, but the time wasn’t right, you’ll feel for Julie McGuire.
You’ll love to hate Tyler Jensen, the charismatic psychotic NY Times Bestselling Author who becomes Julie’s mentor.
As for Dade Donovan – He’s the kind of guy you’d love to take home with you. Sexy as hell, sweet as pie,  but with a backbone of steel.
BELOW IS AN EXCERPT FROM THE FIRST CHAPTER , ALONG WITH  AN IMAGE OF TYLER JENSEN. 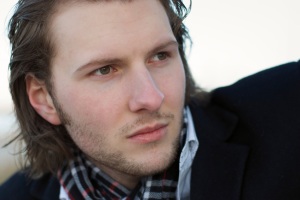 Julie McGuire gazed intently from her table in the filled-to-capacity dining room of the Wyndham Hotel. The Love To Murder Mystery Conference had saved the best for last. New York Times bestselling author, Tyler Jensen, now approached the podium.

His entire bearing commanded attention, from his shoulder length wavy chestnut hair pushed back behind his ears, to his sexy sideburns and piercing hazel eyes. She guessed him to be thirty-five, about five years older than she. Clever, rich, tall, and handsome, Tyler Jensen looked the embodiment of any woman’s fantasy.

“Many of you have killed,” Tyler said, pointing to his audience of two hundred plus.

Julie stared. What did he mean?

My God, he knew. She ignored the tinkling sound, as a waitress placed a carafe of ice water on the table.

Julie stared, transfixed, at Jensen. His every word spoke to her. She’d taken the easy way out and become a lawyer instead of following her heart’s desire to be an author. The decision ate at her. After six years in the practice, she’d saved enough money to get by. She badly wanted to claim her dream and step forward into the world he described.

All too soon, he’d finished his speech. “Any questions?”

Julie shot up her hand. Jensen’s knowing hazel eyes fastened on her, as if assessing her straight blonde hair and tall, slight frame .

On suddenly stiff legs, she rose. “What makes you write mysteries?”

“I have an urge to voyeuristically experience atrocities. I’ve no idea where the fascination comes from. Perhaps I was a criminal in a former life,” he said with a self-deprecating laugh.

Julie swallowed. His answered filled her with a vague uneasiness, but she didn’t know why.

“Yes, uh, thank you.” She straightened her skirt and seated herself.

Even as she sat gathering her thoughts, she felt the pull of his charisma. Every word and gesture hinted at a barely contained power, strong enough to transform the sturdiest dissenter into a willing robot. His rakish looks dared her to ignore her orderly upbringing.  Inwardly smiling, Julie guesstimated at how many other women in the massive banquet hall were as enthralled by the man’s knowledgeable gaze. Did their blood pulse as fast as hers?

The only man who’d ever tweaked her interest to such a degree was her partner, “Dangerous Dade.” He was the one who’d convinced her to become a lawyer, saying it was the best way to escape the poverty of their blighted neighborhood. He was her standard for comparing other men.